A rich and mighty Persian once walked in his garden with one of his servants. The servant cried that he had just encountered Death, who had threatened him. He begged his master to give him the fastest horse so that he could make haste and flee to Tehran, which he could reach that same evening.
The master consented and the servant galloped off on the horse.
On returning to the house the master himself met Death, and questioned him, “Why did you terrify and threaten my servant?”
“I did not threaten him; I only showed surprise in still finding him here when I planned to meet him tonight in Tehran,” said Death.

Once upon a time, two castles stood on opposite sides of a valley. The knights living in these castles were friends, but the steep hills and river in-between made it difficult for them to meet often. So they built a bridge, made of leather, that provided a convenient way to nurture their friendship.
One day, for some reason, they got into a tangle that made them so mad at each other that they cut down the bridge.
Their kids, however, had become friends too, and they were definitely not happy with that. What to do?
One of them shot an arrow across the valley, attached to which was a ball of wool.
The kid on the other side of the valley understood immediately, attached the strand of wool to a strong tree and shot back the ball. This game had to go on for quite some while. It took many, many turns of throwing the wool, attaching the strand, sometimes adding small notes to the arrow, until finally the newly created bridge was strong and solid enough to allow then to walk across it.

The Countess of Leiningen

During the Peasants‘ Revolts, many a castle in the Palatine was pillaged, burned or otherwise destroyed. Usually the inhabitants had already fled when the enraged peasants arrived, fearing their revenge – their explosive mixture of poverty, hunger, misery and frustration.
The Countess of Leiningen was a lady known for her charity as well as her courage. She stayed.
But, of course, she wasn’t spared either. One night she heard the sounds of the angry peasants approaching her castle, ready to loot its halls and cellars before burning it down, as had happened to those nearby.
What to do now?
There were no knights around to protect her, they had all run away. Just some servants were with her, and they were scared out of their wits.
The farmers were on the premises. Just when they were getting ready to break the gate, the Countess of Leiningen opened the door for them widely, greeting them as if they were honored guests. She wore an apron and invited them in. She cooked them a meal which she also served. The peasants were confused by this unexpected reception and felt honored by the Countess with an apron serving them. So they enjoyed the wining and dining, thanked her and left the castle without doing any harm.

A great dryness had come over the land. First the grass died, then bushes and small trees. All men and animals died, and still no rain came.
One small flower had stayed alive because a tiny source was still able to provide a little water. But the source was desperate: „Everything is drying and dying of thirst, and I cannot change anything! What’s the use of me getting some drops of water out of the earth?!“
An old tree who stood near-by because his big roots had reached deep down, heard the complaint and said to the source before he died: „No one expects you to make the whole desert bloom! Your job is to give life to ONE flower – nothing more“.

The essence of the Torah

(Thanks to Alan in whose bookshelf I found this story, and thanks for the transcription into Hebrew) 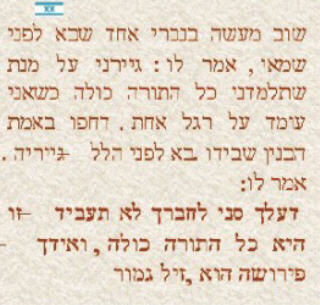 There was once a gentile who came before Shammai and said to him: „Proselytise me, but on condition that you teach me all the Torah while standing on one foot“. He pushed him away with his builder’s measuring rod. The man then went to Hillel to ask the same thing. Hillel said to him „What is hateful to you, do not unto your fellow man, this is the entire Torah, the rest is commentary, go and learn“

The next story I told the health counsellors of the African Child Foundation in Ndejje Village in Uganda and also their pastor. I add it especially for them, to tell it to people who are about to miss the boat:

Praying for help and missing the boat

Heavy rains had led to a flood, rivers were overflowing and houses had to be evacuated. A pious man in the village insisted to stay in his house and pray.
The waters were rising, he had to move to the floor above. While he was asking God for help in prayer, a boat passed by his window, and one of the two men in the boat called „He y, come over into our boat, we came to rescue you!“
The pious man just smiled and said:
„Thank you, but don’t need you! I put my faith in God, he will help me!“
The men shook their heads and rowed away.
The waters kept rising, the man had to go to the attic of his house. There he continued praying.
All the town was devoid of its inhabitants by now, and all the rescue teams had left. Then, miraculously, another boat passed by!
„Glad we found you! This is your last chance, jump into the boat and you’ll be safe.“
Again, our man sent them away.
„I trust in God, I pray and he will help me, he will save me from drowning!“
No way he could be convinced.
And still the waters kept rising.
By now he stood on the roof of his house. Smiling, praying, confident… although the situation got worse and worse. The rain fell and fell and fell…
Finally he heard a hum.
The hum grew louder, and it turned out to be a helicopter.
Someone from the helicopter threw down a rope and shouted:
„Grab that rope, we pull you up into the copter and get you out of there! Quick, this is your very last chance, if you stay you will drown!“
Still the man insisted on prayer being the only help, and he also sent the helicopter away. Little later, the water rose to his chin, his nostrils, and finally he drowned.
When after his death he met Peter at Heaven’s Gate, he was upset.
„How come I had to die? I had so much faith, and I prayed all the time that God would help me, why did I have to drown?!“
Peter scratched his head and looked confused:
„Sure, we got your call. God sent you two boats and a helicopter – how come they didn’t get to you?“

A woman had lost her only child. She was seized by tremendous grief and couldn’t stop crying. Then one night, while she was sitting by the bed, weeping, the child appeard.
He held a little jug in his hand, and the jug was pouring over, so that his lttle shirt was all wet.
He said: „Dear Mother, please don’t cry anymore for me! See this jug? These are the tears you shed for me. The jug is overflowing already. My shirt is all wet, and I cannot find peace in heaven. I love you, and I know you love me. I want to be your guardian angel, but please, please stop crying, so that my shirt can dry!“
That made sense to the mother. She dried her eyes and didn’t weep any longer, and gradually, little by little, her heart filled with thankfulness for the years she had spent with her child, albeit only a few. With time she knew that he would always be there, as we never lose what we keep in our hearts.

Nixivan had invited his friends to supper and was cooking a succulent piece of meat for them. Suddenly, he realised that he had run out of salt.
So Nixivan called to his son.
‚Go to the village and buy some salt, but pay a fair price for it: neithertoo much nor too little.‘
His son was surprised.
‚I can understand why I shouldn’t pay too much for it, Father, but if I can bargain them down, why not save a bit of money?‘
‚That would be the sensible thing to do in a big city, but it could destroy a small village like ours.‘
When Nixivan’s guests, who had overheard their conversation, wanted to know why they should not buy salt more cheaply if theycould, Nixivan replied:
‚The only reason a man would sell salt more cheaply than usual would be because he was desperate for money. And anyone who took advantage of that situation would be showing a lack of respect for the sweat and struggle of the man who laboured to produce it.‘
‚But such a small thing couldn’t possibly destroy a village!‘
‚In the beginning, there was only a small amount of injustice abroad in the world, but everyone who came afterwards added their portion, always thinking that it was only very small and unimportant, and look where we have ended up today.‘ (Paulo Coelho)